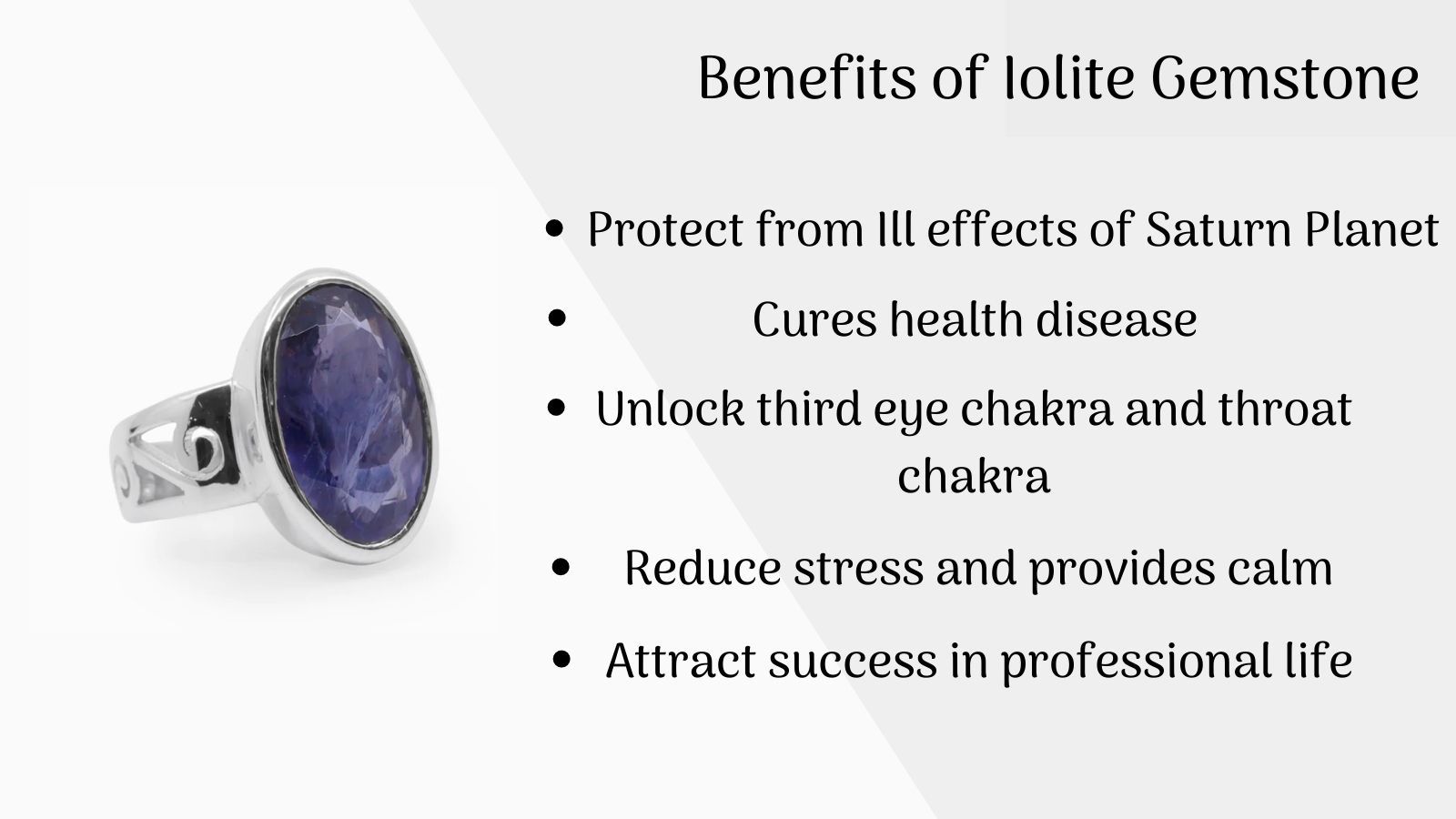 Iolite gemstone is a duplicate stone and astrologically substitutes of precious blue sapphire gemstone. It has a violet blue colour and belongs to the cordierite mineral family. It is also known as neeli or kakaneeli in Hindi. Iolite has all the similar properties as blue sapphire. Iolite gemstone is highly recommended to the person suffering from Sade sati or ill effect of Saturn planet.

A normal person can find the difference between iolite and blue sapphire. It is ruled by the Saturn planet, while wearing a Saturn mantra chant to energise it. Iolite is a pleochroic or dichroite type of stone which means it shows different colours while seeing it from different angles. It is available in different shades of blue colours. Hardness of blue sapphire stone 9 and also the second hardness stone but its substitute iolite has the hardness of 7 to 7.5 on mohs scale.

Activates chakra: Iolite is connected with the third eye chakra and throat chakra, wearing this stone can help you to open these two chakra of the body, unlock it and also maintain it.

Provides mental peace: Neeli gemstone is effective for providing mental peace to its wearer. It makes the mind less and calm. It also gives relief from negative thoughts and stress.

Health benefits of wearing iolite: Metaphysical properties of iolite stone is so energetic that it can even cure health diseases like skin infections, digestive system and nervous system.

Who can wear it Iolite gemstone

Iolite gemstone is effective for all but most effective for the people suffering from Sade sati or ill effects of Saturn planet. Except this it is also effective for people doing business and facing loss again and again, people who don’t maintain their third eye and throat chakra. It is also a birthstone for zodiac sign Virgo. According to Indian astrology it is suitable for the zodiac sign Capricorn and Aquarius.

How to wear iolite gemstone:

Day and Time: Iolite is connected with the Saturn planet so mostly it is recommended to wear on Saturday morning of shukla paksha between 5AM to 7AM.

Carat Weight: Like other gemstones, it is also at least 1/10th of the body weight worn. It can be maximum but not less than 1/10th of body weight. But if you are wearing the high quality of stone then it should be less.

Metal: Suitable metal for wearing iolite is silver or white metal. Gold is usually avoided for it, you can use silver, white gold and platinum. Chanting Mantra: This mantra is needed when you energize your iolite stone so that it effects properly. You need to chant this mantra 108 times ‘Om Sham Shanicharaya Namah’, ऊँ शं शनैश्चराय नमः।

Origin: Origin helps to know the quality of that gemstone. Iolite gemstone comes from many different countries that are Burma, Sri Lanka, India, Brazil and Madagascar. Among all these countries Indian and Madagascar use iolite because of their shine and luster.