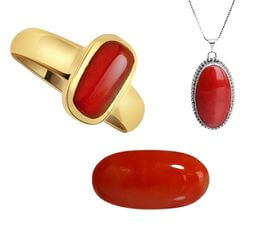 Coral is a red colored gemstone also known as Munga in Hindi. It is made under sea by marine creatures. It represents Mars in astrology and worn for good health, condition and business success. Coral is opaque in appearance and heavy in weight. Coral gemstone is ruled by planet Mars and suggested by astrologers for mars effects.

Coral comes in white orange and in red color but red coral is high in demand. Coral is considered a very good stone it had many astrological benefits. Coral can be worn in a ring or pendant or in other jewelry. Coral is suggested to wear to leaders and businessmen for effective results.

Metal: There is no restriction of metal for coral gemstone. You can wear coral on which metal suits you. You can wear it on Gold, silver and panchdhatu (Alloy).

Finger: Munga is worn in ring finger for effective result. Except ring Coral can be worn in pendant or in other jewelry.

Day and time: Coral is the gemstone of mars then for wearing coral Tuesday is considered best day. Wear it on Tuesday morning between 5AM to 9 AM.

Health benefits of coral: Coral is also wear for health benefits. It can cure health disease of digestive system, blood circulation and mental health. It improves the immunity and makes wearer health and fit.

Good for mars affected people: Coral gemstone is gemstone for mars planet. It protects the wearer from the negative effects of mars. It is suggested to those people whose mars are wrongly placed.

Treatment: There is not treatment done with this coral gemstone. Here is an only type of coral one are real and one is fake and only natural coral is preferable and effective. Original coral is expensive and fake coral is less expensive.

Cut: Coral is available in different cut and it can be worn in different jewelry. Price is different for every cut and jewelry. It is depend on the wearer which coral jewelry they wants to wear.

Origin: Coral comes from many countries like India, Japan, USA but coral which comes from Italy are more preferable. Italy is the only origin which gives the original quality of coral gemstone.

Color: Coral comes in every shade from orange to red color. But most of the times red coral is high in demand it looks very pretty.

Treatment: There are two types of coral are available. One is fake and one is real. Original coral is considered best for astrological benefits. And fake coral is worst quality. 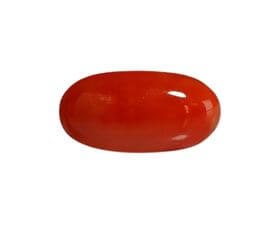 FAQ
Which coral is best?

Italian red colored coral is best, it is more effective and it is also high in demand.

For which planet coral is worn?

Coral gemstone is worn for Saturn planet. Whose Saturn is weak or wrongly placed and who are in their sade sati period is recommended to wear for effective result.

What is the price range of Coral gemstone:

Sanjay is very cooperative in understanding customer requirements and is truly a skilled professional! He accomodated all my requirements and delivered the Moissanite Ring for which I had placed an order in the best possible way. The ring is very beautiful MashaAllah and craftsmanship is upto the mark! To sum it up - I would say The product, The packaging and The delivery were Amazing!!