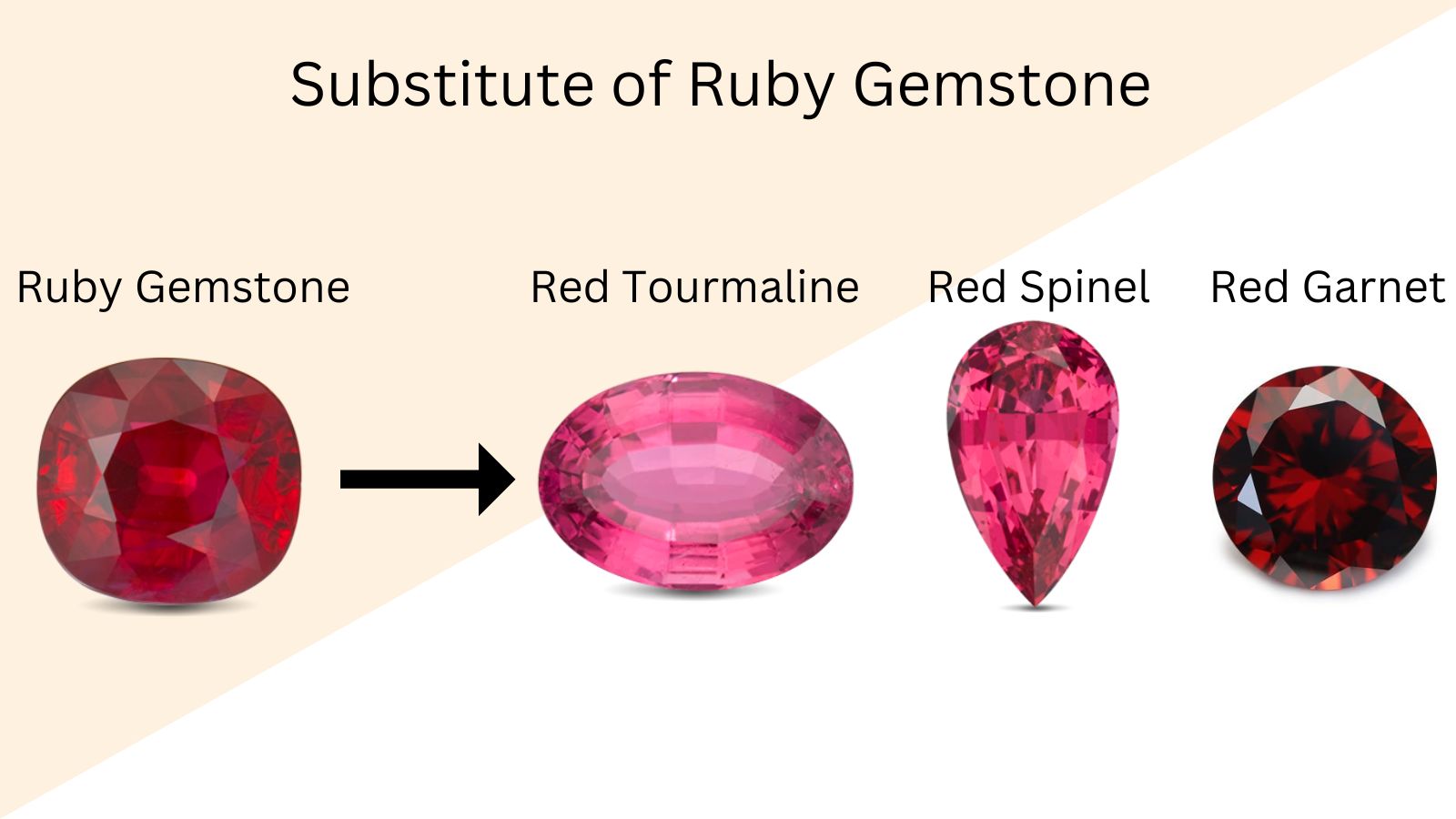 Substitute of ruby gemstone contain all the benefits same as ruby gemstone. Ruby (Manik) is the most beautiful and attractive gemstone used for the planet sun, also it is known as the “king of gemstones” as it has the powerful effective energies. Ruby is a stone which is even more expensive than the diamond, its substitutes are also used. Substitutes of ruby are red garnet, red spinel, red tourmaline and also tiger’s eye. All the substitute of ruby contain its property and look like ruby they are also reddish pink in color. These substitute also have their own benefits and have a use for different purposes in astrology.

Red garnet is one of the good substitute of ruby gemstone, it contains all the effects same as ruby gemstone. Red garnet is more beneficial for those people who do more tour and travel. Benefits of wearing red garnet is that it cures heart, spine, lungs, bones and reproductive diseases, gives positive vibes and increases the will power of its wearer.

Qualities of red garnet: Major sources of red garnets are Brazil, India, Madagascar, USA and Sri Lanka. Most popular garnet comes sourced from India but they aren’t of good quality. Better or a fine quality comes from Africa. Red garnet is available from red to deep red colour, but pure red tone is more preferable in astrology.

Red spinel is also called Ruby spinel gemstone. It is a rare gemstone and also a good substitute for ruby gemstone. It is a very beautiful stone, its luster; shine and transparency attract everyone towards it. Along with its attractive looks its benefits also attract everyone, the benefits of wearing a red spinel stone as a substitute of ruby attracts opportunity and money, improves financial status, gives relief from mental stress, balances emotions, and is also beneficial for health.

Quality of red spinel: Red spinel is very rare and comes from Myanmar, Tanzania, Sri Lanka and Tajikistan. It is a rare expensive substitute for ruby, its price increases with the size of spinel. It is available in all shapes but its faceted form is quite rare and expensive but cabochon spinels are easily found in the market.

Red tourmaline is a red variety of tourmaline mineral family and also known as rubellite tourmaline. Because of its lustre it is mostly used in jewellery but it also has a different place in astrology. It is a substitute of ruby gemstone containing all the benefits of ruby but also has other benefits like it detoxifies the blood and whole body, provides calmness, increases energy level, attracts finance and prosperity.

Quality of red tourmaline: Rubellite tourmaline is founded in Russia, Afghanistan, Brazil, Madagascar, Nigeria, and U.S.A. Brazil and Nigeria source the best quality red tourmaline. Their colours start from bright red to deep purplish red. It is a very demanding gemstone in the market for astrology and as well as jewellery purposes.

Tiger’s eye is a gemstone which looks totally different from ruby. But it contains all the benefits of ruby gemstone and also considered a substitute of ruby gemstone. It is yellowish- brown in colour and contains some dark lines on its surface. It is mostly used as a healing crystal. The tiger’s eye stone is effective in boosting self confidence, improving leadership quality, and uplifting the joyful mood and cures health disease.

Qualities of tiger’s eye: Tiger’s eye is founded in India, Burma, Korea, Australia and Brazil. Tiger’s eyes are natural and sometimes fake also, you can easily check it by checking its stripes, it appears brown to black stripes and shines in natural lights.

What is Ratti: Importance of Ratti in Gemstone